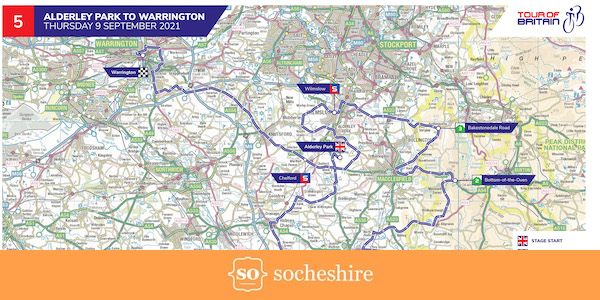 Wilmslow Town Council is thrilled to announce that Wilmslow will host an intermediate sprint of the Tour of Britain on Thursday 9th September 2021.

Martin Watkins, chairman on Wilmslow Town Council said of the news, “Being selected as a Stage partner of the Tour of Britain is fantastic news for Wilmslow.

“As well as being an exciting event for residents, it will raise the town’s profile nationally and regionally, attracting visitors to the town, and promoting cycling.

“We hope that Wilmslow’s businesses and schools will embrace the wonderful opportunities it brings.”

The Tour of Britain is British Cycling’s biggest professional race, featuring Olympic, world and Tour de France champions, held annually across eight days in September. The Tour is free to watch and attracts a roadside audience of over 1.5 million spectators. Live coverage of the race and highlights will be shown daily on ITV4, in addition to featuring on local and worldwide news.

Knowing that hosting a sprint of the Tour of Britain would have huge benefits to the town, Wilmslow Town Council first agreed to express an interest to the Tour’s organisers in March 2021.

The basic cost to the Town Council of being a stage partner will be £10,000, and the council will work with Groundwork – Wilmslow’s town centre management service – to harness the opportunity to attract visitors from the region into the town centre as part of a series of initiatives to drive footfall to the town.

The race will enter Wilmslow travelling down Dean Row Road, turning left at the Bluebell lights then travelling down Manchester Road to Wilmslow Town Centre and turning right at the main lights by The Rex Cinema.

The sprint continues along Water Lane, concluding prior to the junction with Hawthorn Street. Stage five will then continue towards Morley Green and beyond.

It is currently expected that the Wilmslow sprint will take place between 2.30pm-3pm.

Wilmslow Town Council will issue more information via their website and social media nearer to the event.

Further information on the Tour of Britain can be obtained from the event’s official website at tourofbritain.co.uk.