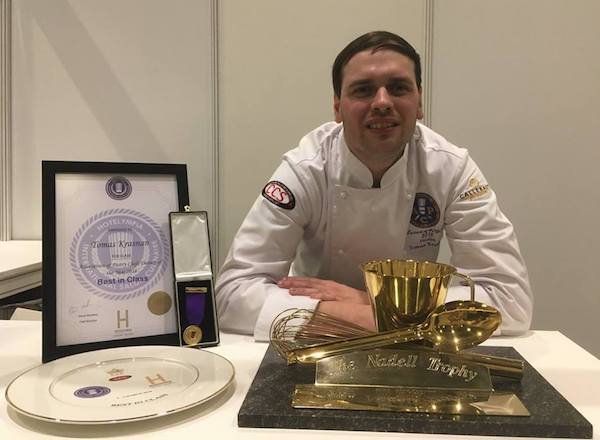 Tomas Krasnan, head pastry chef at The Mere Golf Resort & Spa in Knutsford, has been awarded the Gold Medal for ‘Dessert of The Year’ as well as ‘Best in Class’ at this year’s Association of Pastry Chefs Dessert of The Year Competition.

The competition, now in its twenty-fifth year, took place in London’s Hotelympia on March 8th 2018. It showcases the best in the business with some of the biggest names in the hospitality industry having competed.

In order to obtain the award, entrants had to submit online designs of an original dessert suitable for fine dining with an ingredient from Callebaut.

From this, ten entrants were chosen to take part in the live finals to create the dessert in front of four judges.

Each dessert was marked on its originality, hygiene, number of skills shown, professional approach, visual appeal, taste and balance.

Krasnan scored higher than all finalists with his Yuzu Delice, accompanied with a lime and matcha green tea, which saw him win both the Gold Medal and ‘Best in Class’ award.

“He is an extremely talented Pastry Chef with a great eye for presentation, detail and flavour profiles. It’s been a fantastic opportunity to be involved in, as it’s allowed us to share to the rest of the country the skills we get to see and enjoy every day.

“When we launch the new Browns summer menu , Tomas’ Yuzu Delice dessert will feature as a special, so all our guests will be able to enjoy as well.”