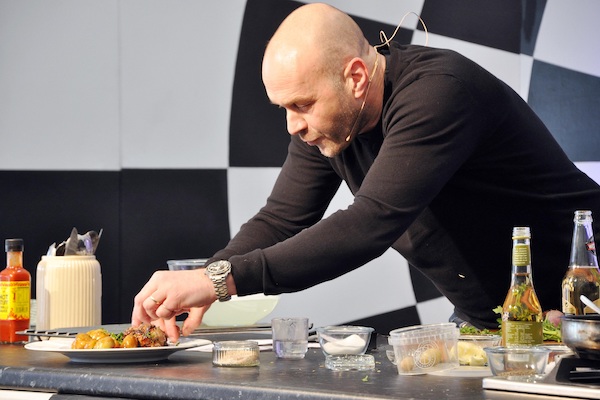 Organisers of the 2019 Taste Cheshire Food and Drink festival have announced that Sunday Brunch and Strictly Come Dancing star Simon Rimmer is heading back into the kitchen to cook on the opening day of the festival next year.

Festival organiser Briony Wilson was thrilled to be able to welcome back one of the event’s most requested stars.

Briony explained: “Simon took a break from doing festivals in 2017 and it was the first time we hadn’t had him on the stage at the stoves for over 10 years.

“He has such a loyal following that just keeps building and building that many people asked us to try and get him to come back, so we made contact and he agreed.”

Briony added: “Simon is not only a great chef but he is a fabulous entertainer who manages to weave so many brilliant stories in to his hour on the stage, whilst delivering outstanding food.

“It’s great entertainment and I am so pleased to confirm he is coming back.”

Simon Rimmer has appeared at the Chester food and drink festival since 2002 and describes it as one of his favourite festivals.

Simon commented: “I was relatively unknown back in 2002 doing a few food spots on Good Food TV and from the moment I started doing the Chester festival their event, like my own career, has blossomed.

“The people who attend are always so knowledgeable and really like to get involved in what we are doing on the stage. Once I got the invitation to return it was an easy decision.

“I really look forward to Chester and we will have something special organised for Easter next year.”

Rimmer will be on the main chef demo stage at 12pm and 3pm on Saturday 20th April with admittance free for all festival ticket holders.

The festival runs over three days – from Easter Saturday until Easter Monday – and is staged at Chester Racecourse.