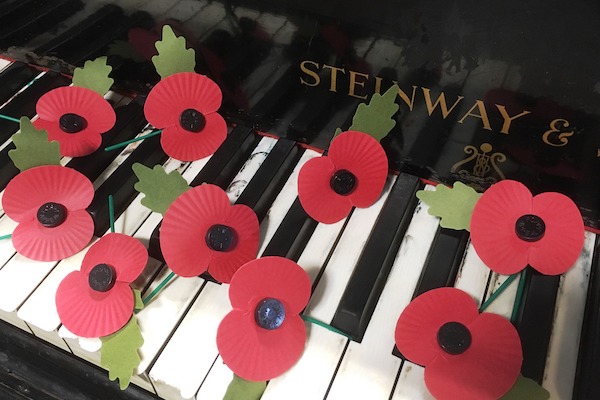 Sixth Form students from Congleton High School have written and recorded a moving original song in remembrance of all those who have fought or lost their lives in war.

The song – which stares the experience of war from the viewpoint of different family members – commemorates the 100-year anniversary of the end of WWI.

It will be uploaded to iTunes soon to help raise funds for The Royal British Legion.

Charlotte had seen the silhouettes of soldiers (There But Not There) around the local area and arranged for Congleton High to mark the milestone anniversary through music.

Recognising that there would be copyright issues with an existing song, Miss Blundred challenged her sixth form students to write an original piece.

The group relished the challenge and chose to base Remembrance on how people would have felt at the time:

– The first verse is a child’s perspective on war and depicts how they would have missed their father but would try to stay strong for their mother.

– The second verse is from the mother’s point of view, writing to her husband to tell how their child is growing older and starting school.

– The final verse is the father’s story and explains some of the things he has seen in war and why he chose to sign up to fight for his country.

The song’s concluding message – “The poppies that we wear today tell the stories of the brave. We wear them with pride to show our country’s sacrifice. Lest we forget” – provides a link to commemorative services and the moments of silent reflection we use to remember those involved in all wars each year, in November.

Once the song’s lyrics had taken shape, the sixth form students asked if younger members of the school could help record the chorus section.

The lower school students welcomed the opportunity to be part of the commemorative fundraising project, and enjoyed singing the chorus section.

Remembrance will soon be available on iTunes. In the meantime, those keen to hear a few bars of the song can listen to a short clip on Congleton High School website.

There has also been a JustGiving page set up at for anyone wishing to donate to The Royal British Legion ahead of the track appearing on iTunes.