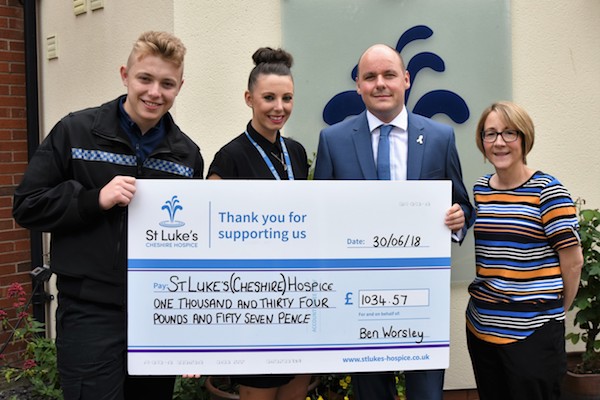 A Cheshire police cadet has overcome his fear of heights to take part in a sky dive to raise funds for St Luke’s Hospice in Winsford.

Ben Worsley, from Crewe, raised more than £1,000 by jumping 10,000 feet out of a plane to support the charity which provides care to people in mid and south Cheshire suffering from life-threatening illnesses.

The 17-year-old said: “I had previously taken part in a 24-hour bike-a-thon with Cheshire Police in aid of St Luke’s and PCSO Jill Cope who passed away at the hospice.

“Seeing the great work St Luke’s did for Jill, and the work they do for other families, was a real eye opener and I wanted to give something back. I decided to raise even more money for such a great, worthy cause and I thought a sky dive would be a real challenging way to do this.

“The support I have received from St Luke’s has been amazing and I am proud to have raised so much money for such a brilliant charity.

“I hope this inspires others to carry on donating and supporting the hospice, so they can help many more people.”

The budding police officer, who is currently studying public services at Cheshire College – South and West in Crewe, was congratulated by the county’s police and crime commissioner, David Keane, as he handed over a cheque to the hospice.

David commented: “I’m incredibly proud of Ben for overcoming his fear of heights to jump from 10,000 feet for such a worthy cause.

“Ben is a real asset to our police cadet programme and has exhibited real hard work and dedication since joining the scheme last year.

David explained: “Police cadets are required to complete 40 hours of volunteering work but Ben has given up his own time to complete almost 150 hours by supporting officers at events and helping with PC and PCSO training.

“This year, he’ll be joining the programme as a senior cadet to support the new recruits. I wish him every success in his new role and look forward to hopefully seeing him in a full police uniform one day.”

The funds that Ben has raised for St Luke’s will make a huge difference to the hospice with nine out of ten patients cared for from money received from fundraising and donations.

The hospice, which celebrates its 30th birthday this year, supports more than 1,000 Cheshire residents each year.

Sally Rowley, events fundraiser at St Luke’s, said: “Ben has raised a fantastic amount for the hospice and we are so grateful for his fundraising efforts.

“It costs nearly £9,000 to run the hospice for a full 24 hours and events such as the skydive are crucial in allowing St Luke’s to continue to provide vital care and support to local communities throughout Cheshire.”