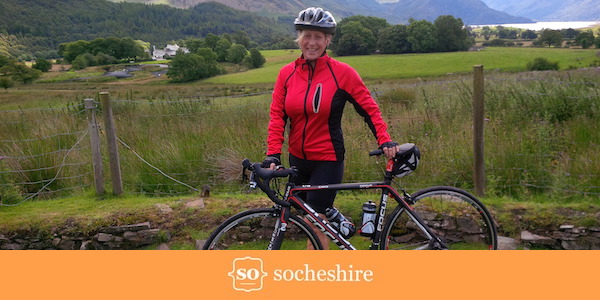 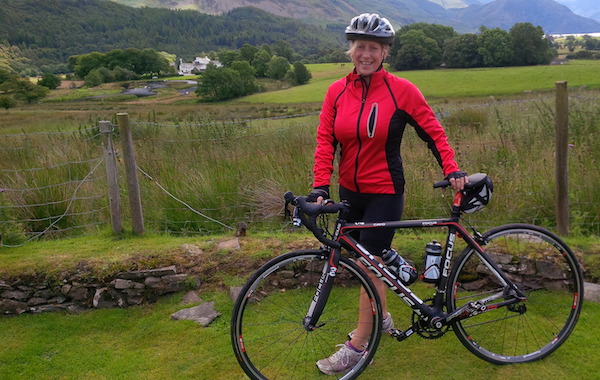 Cheshire East Council’s campaign to get more people pedalling has helped propel its cycling champion into the national spotlight.

Cllr Suzie Akers-Smith has won recognition by Cycling UK as one of the country’s top inspirational women cyclists.

Each year, the cycling charity, in conjunction with bike makers Raleigh, selects 100 Women in Cycling to become leading lights in their campaign to promote cycling and encourage others to bike more and drive less.

Cheshire East’s walking and cycling champion, Cllr Akers-Smith, said: “It’s a great honour to have been chosen. I am passionate about cycling and I want to encourage more women to cycle.

Cllr Akers-Smith now joins an impressive pantheon of women throughout the UK, including Cheshire East-based Olympian Laura Kenny. But the vast majority of those selected come from all walks of life and are chosen for a variety of different reasons.

They include mums who cycle with their children to and from school, community leaders, mountain and endurance cyclists and women who cycle to and from work.

Cllr Akers-Smith said: “This endorses the main thrust of my work – changing the mindset of motorists as well as cyclists, and those women who are reluctant to take up cycling.

“People want to feel safe. They don’t want to be intimidated by passing vehicles. If we can make cycling attractive to children and get more women into cycling, then I think that’s the way to go.

“It’s a massive barrier for women. Most towns in Cheshire East are quite small and you can get on a bike and tootle across town in minutes, reducing your journey time and helping to get cars off the road.”

Cllr Akers-Smith played a key role in the introduction of active travel routes across the borough and expects to see Cheshire East’s first protected cycle route, along the old A34 Manchester Road, between Wilmslow and Handforth, delivered later this year.

She added: “Active travel routes have helped to protect children on bikes and if we can get 50 kids cycling to their school, we can reduce car journeys significantly.”

She is also hoping to promote the use of recumbent cycles in Cheshire East, which are particularly suited to people with a disability. Also in her sights is a ‘20s Plenty’ campaign for Cheshire East, encouraging drivers in built-up areas to reduce their speed, possibly through enforcement and reduce accidents.

Council leader, Cllr Sam Corcoran – himself a keen cyclist – said: “I congratulate Suzie on being selected to be one of this year’s 100 women cyclists, chosen by Cycling UK.

“This doesn’t just recognise the hard work she has done for this council but for everyone across the borough to promote cycling as a safe, clean and convenient way to travel.”

Deputy leader, Councillor Craig Browne, chair of highways and transport, said: “This is a fantastic achievement which recognises the hard work Suzie has done to promote cycling in the borough on behalf of Cheshire East Council.”

Cycling UK chief executive, Sarah Mitchell, said: “Congratulations to Cllr Suzie Akers-Smith for making it into our 100 women in cycling in 2021. It’s an incredible achievement and testimony to the tireless work she has done to raise the profile of women’s cycling.

The council is currently assessing feedback from its latest consultation on proposals for the next phase of the active travel scheme, which would be a further step towards a safe, joined up walking and cycling infrastructure across the borough.

This would see several more active travel routes introduced – but this time on a permanent basis.