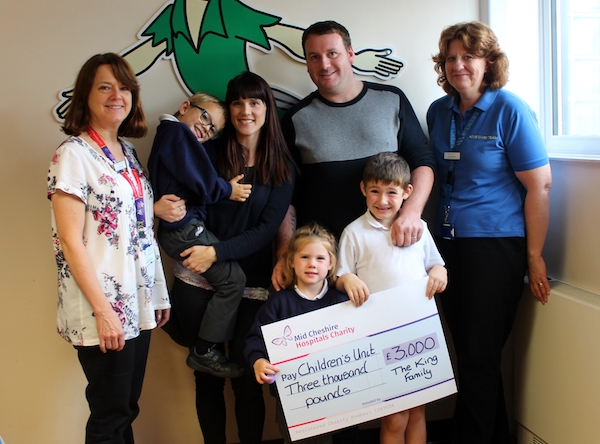 A mum of three from Northwich has raised £3,000 to say thank you for the care her children receive at Crewe’s Leighton Hospital.

Since her children were born, Rachael and her husband have done lots of fundraising for MCH Charity and with this latest donation have raised a total of almost £10,000 as well as donating a television for the children’s out-patients department, an iPad and a ‘bubble machine’.

Alongside her tireless fundraising Rachael won an Epilepsy Action ‘Speaking Out’ award earlier this year for using her Facebook page ‘3 little epilepsy warriors’ to share advice with other parents of children with the condition.

She has also featured in a BBC Three clip entitled ‘5 things to know if you love someone with epilepsy’.

Emma Robertson, MCH Charity manager, said: “I first met Rachael and her family at the end of last year and was blown away by her determination and enthusiasm for fundraising.

“Her positivity shines through and it’s easy to see why so many people wanted to support her by getting involved and helping to raise this fantastic amount.

“This latest donation will go a long way to help build our new outside play area for children cared for at Leighton Hospital, we can’t thank Rachael, her husband Ben and all her family and friends enough for their ongoing support.”