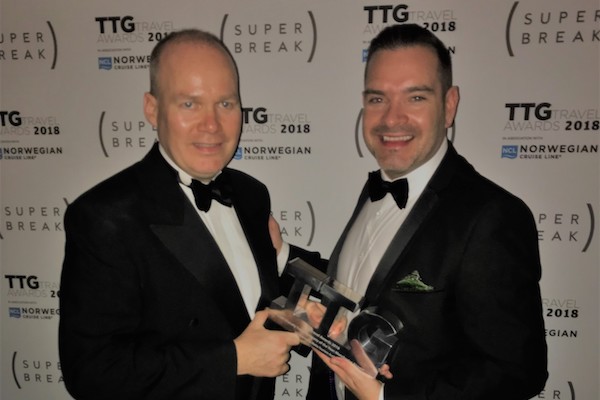 Manchester Airport was one of ten contenders for the accolade and beat off stiff competition from Thomas Cook Group, James Villa Holidays, Flight Centre and Kuoni to name a few.

The event was held at the Lyceum Theatre in London, followed by an after party at the Savoy Hotel.

Manchester Airport was awarded the gong for its strong and ongoing commitment to the LGBT agenda in travel, having sponsored numerous Pride events across the country this year.

This year the airport group backed six UK Prides, which is up from five last year.

The hub also has an actioned packed diversity agenda for its staff and supports a host of inclusivity initiatives across its vast catchment area and beyond.

The award was collected by Patrick Alexander and Olivia Bussey from the airport’s marketing team, plus Seb Thompson from the press office.

Alexander and Thompson were both also shortlisted as TTG Travel Pride Champions earlier in the year for their commitment in this area.

On receiving the win, Patrick Alexander said: “It is a real honour to take home this award and I’d like to thank everyone who voted for us, plus the team at TTG.

“It’s been a great evening with the travel industry’s finest on show and it’s a delight to take home the award for LGBT-Friendly travel company of the year.”

Seb Thompson added: “After a busy summer celebrating Prides across the UK it fills me with utter pride and joy to win this accolade.

“Everyone at the airport will be over the moon and we look forward to continuing to champion the LGBT agenda in 2019.”