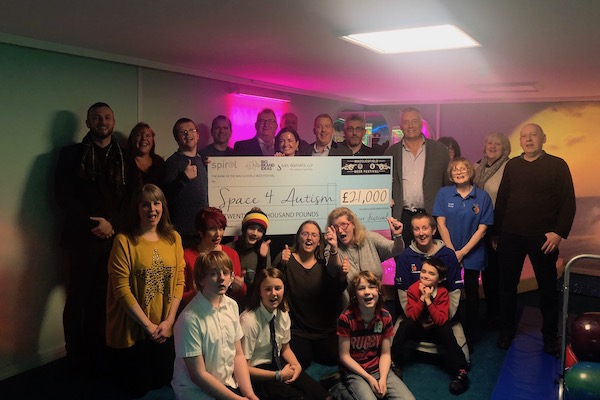 The CSAR team is a group of volunteers on-call 24 hours per day, 365 days per year, which deploys in any weather to support search and rescue missions in the region.

They work in collaboration with Cheshire Police and other emergency services.

CSAR plans to use the funds to equip the team with light-weight portable defibrillators, cold weather gear, and radio equipment.

Simon Lane of CSAR explained: “The service is run entirely by volunteers and we rely on donations to enable us to equip our rescue teams with vital equipment to find missing people quicker, and administer first aid while out on the field.

“We’re delighted to be receiving funds raised by Macclesfield Beer festival, it means a lot that the funds are raised by a team of local volunteers, and by local people attending this much-loved annual festival.”

The charity has recently opened a new Sensory room at their site on Mill Lane, Macclesfield.

Cheryl Simpson, CEO of Space4Autism, said: “We’d like to thank the Macclesfield Beer Festival Committee, sponsors and festival attendees for enabling us to create a sensory room at Space4Autism.

“The sensory room is already proving hugely valuable to so many of our centre users.”

Micky Jones, Macclesfield Beer Festival committee member, commented: “Each year we look forward to bringing together Macclesfield residents and people from across the region.

“They can enjoy some great music, a few pints of beer or cider, a glass of wine or fizz – or enjoy our new gin bar – whilst raising a huge amount of money for a much-deserving regional charity, as well as our ongoing support of grass-roots rugby in Macclesfield.”

Micky added: “This year – as we celebrate a momentous 25 year anniversary of the Macclesfield Beer Festival – we’re thrilled to be supporting Cheshire Search and Rescue.”

Micky also sang the praises of the festival’s sponsors and the volunteers – including Macclesfield Round Table members – who make the event possible.

The Macclesfield Beer Festival, held at Macclesfield Rugby Club, will take place on the evenings of Friday 10th May and Saturday 11th May, as well as Saturday daytime.

On offer will be a wide selection of beers, wines, ciders and perrys, and a range of soft drinks. The festival will also offer a variety of food options.

Guests can enjoy live music throughout the entire weekend, with the Saturday day time session also featuring family entertainment, including a tombola, raffle and a variety of games.