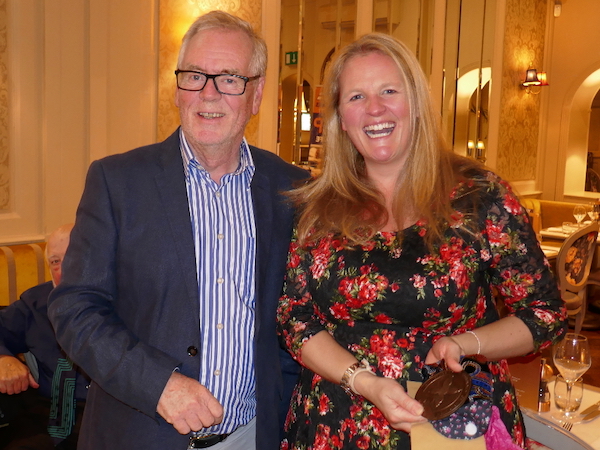 At the dinner, chair of the museum board Nick Dyer presented the Walter and Ada Dutton Prize to local resident Liz Parkin, who is well known for her work with RedShift Radio.

Commenting on the award Nick said: “The many aspects of town life to which Liz has contributed – including the Nantwich Show, Holly Holy Day event, organisation of the Big Day Out, VE Day celebrations, the Doggy Day Out… the list goes on!”

Of particular note is the work Liz does to promote charities and businesses through broadcasting, networking events and social media.

The Dutton Prize, which includes a medal, was endowed by medal-maker Ron Dutton in memory of his parents.

The medal features an image of the church as a symbol of the town and its community.

Each year since 1990 the Nantwich Museum board has nominated unsung heroes for the prize, those who are regarded as having made an extraordinary contribution to the life of the town.

The evening concluded with a talk by Rodney Cottrell outlining the national and local work of the Royal National Lifeboat Institution with particular reference to the success of the boat Audlem Lass.

So far this year, Audlem Lass has carried (in aid of RNLI fundraising) over 5,000 passengers and 400 dogs on its service between Audlem and Overwater Marina.