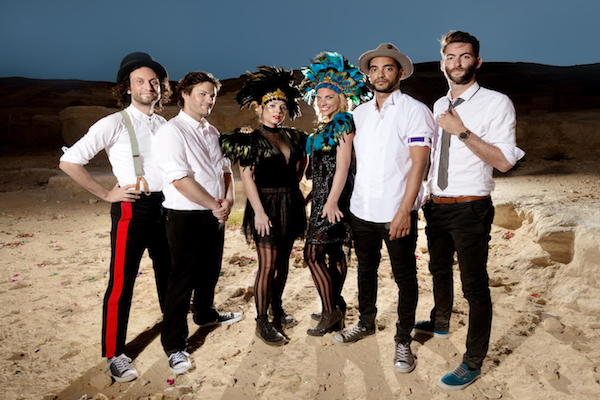 ‘Electric Swing Circus’ a six piece electro swing band from Birmingham, and is set to play the Main Stage on Market Field on Sunday 17th June, closing the festival with an electric performance.

They are known for their unique style of 20’s swing combined with stomping electric beats. Since first appearing in 2011 with their EP ‘Penniless Optimist’ they have played at several festivals across the UK and joined tours across Europe and New Zealand.

In December 2011 they won Best Live Act at the ElectroSwing People’s Favourite Awards.

Following this early success, they released their debut self-titled album in May 2013 on Ragtime Records.

In early 2017 their second album ‘It Flew By’ appeared, embracing their familiar swing and electro roots whilst experimenting in new territory with reggae, rock, dubstep, disco and pop.

With an explosive sound that reverberates back through time, they have their own unique style of swing, seen through their website www.electricswingcircus.com.

Dave Thompson, event manager for Middlewich Fab Festival, commented: “After last year’s fabulous finale, my immediate problem was ‘how do we follow that?’”

“Sunday’s free concert is titled ‘FOLK, ROOTS & BOOGIE’ and I’m sure this crazy bunch will finish it in fine style – problem solved!”

With the growing popularity of the Middlewich FAB Festival, the event promises to be even better by developing the quality of artists and attractions.

Concerts taking place on Saturday and Sunday will continue to have free admission. The full artist line-up for Sunday will be announced soon.

Tickets for Friday 15th June are now available to buy from www.fabfestival.co.uk.

With activities for kids, a floating market, parade and fabulous food, there is something for all ages to enjoy.