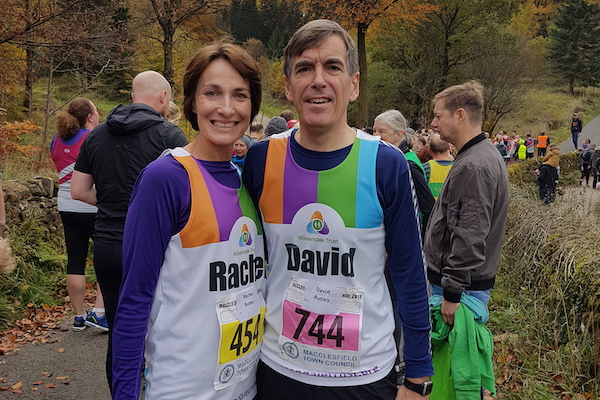 This year’s Langley 7 race was another big success – with organisers expecting a total of more than £3,000 to have been raised for this year’s nominated local charity, the Rossendale Trust.

Macclesfield MP David Rutley, who is patron of the Rossendale Trust, and his wife Rachel took part in the race for the first time.

They ran alongside around 250 other competitors to support the fundraising initiative.

All of the money that was raised for the trust will go directly towards supporting the charity in its transformational supported employment programme, WorkTaste.

The initiative supports individuals with a learning disability to work within the Macclesfield business community, and to gain real experience of work.

The Langley 7 was once again organised by Macclesfield Harriers Athletics Club.

A new race route was used this year, with a different start and finish line and an alternative car park kindly ‘loaned’ to the club for the day by Macclesfield Forest Rangers and United Utilities.

The 8.1-mile course still covered much of the hilly and challenging terrain in the quiet country lanes around Langley and Sutton, including the popular Wythenshaw Lane.

Speaking after the race, David commented: “It was great to see another strong turnout for this year’s Langley 7 race, with such an impressive amount raised for the Rossendale Trust.

“I am grateful to all those who took part and, in doing so, are supporting the Trust’s important work in and around local communities, as well as to Macclesfield Harriers, for the commitment and energy of all its volunteers in once again organising the race.”