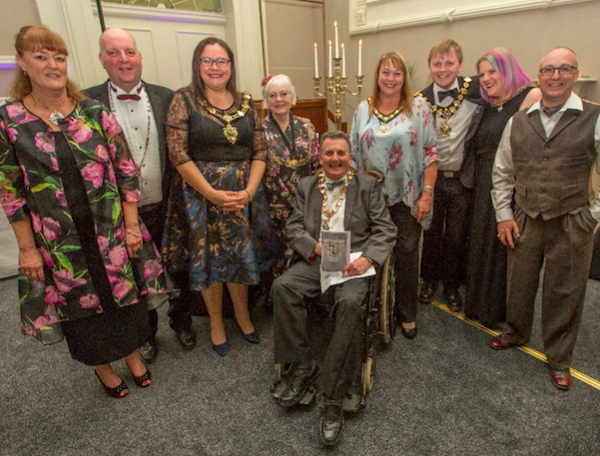 On Saturday 24th March, Cllr Neil Forbes welcomed over 150 guests to his mayoral charity ball at The Courthouse in Knutsford.

The evening was a fantastic success and a combination of sponsorship, tickets sales, prize balloons, silent auction, tombola and raffle helped to raise over £7,400 for the mayor’s local charities: Mid Cheshire Riding for the Disabled, Knutsford Youth Orchestra and Knutsford Friendship Cafe.

Given the venue, there was a courtroom theme for the night allowing guests to ‘dress to impress the jury’!

Those in attendance were served a three course meal prepared by Steven Tuke, executive chef from Flat Cap Hotels.

A number of local companies pitched in to sponsor the event, and ‘DJ Sam Farmer’ from Moo Media kept guests dancing until the early hours of the morning.

During the drinks reception guests were entertained by young musicians aged from 11-18 from Knutsford Youth Orchestra.

Other goodies on offer during the night came via “up, up and away” helium balloons, each one containing a voucher for a fabulous night out in or around Knutsford.

The sound of balloons popping filled the reception space and the balloons were all sold within 10 minutes!

The raffle proved popular too, with star prizes including a two-night hotel stay and a perfume gift box, amongst others.

Cllr Neil Forbes commented: “Wow! Thanks to the phenomenal generosity of local businesses, matched only by that of those who attended last Saturday’s Charity Ball, we raised £7,421 for the charity fund.

“The Courthouse and staff did themselves proud along with volunteer helpers on the night. It certainly was the highlight of my fundraising year.”