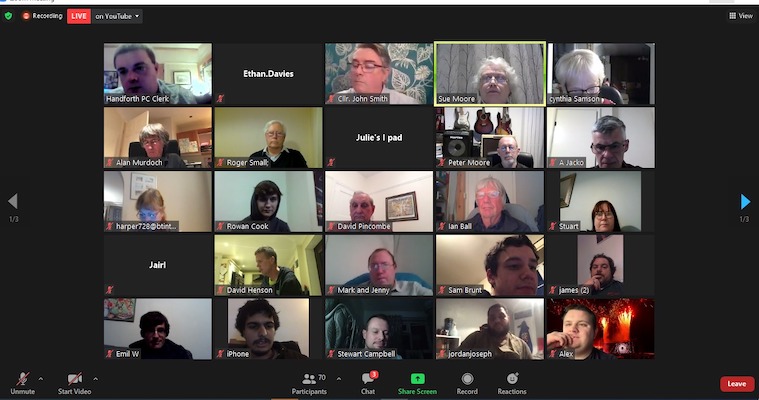 Handforth parish councillors have formally declared their opposition to a proposed merger with Wilmslow Town Council.

Yesterday evening (Tuesday 17th March), councillors voted against a motion to support the move, which is being considered following a Cheshire East review of parish boundaries — although chair Cllr Brian Tolver abstained from the poll.

The review, which was started before the infamous ‘Jackie Weaver’ clip went viral, was published last month and recommended the merger of Handforth, Wilmslow, and Chorley.

During the discussions, Cllr John Smith accused Cllr Tolver of quietly supporting the move: “I have been made aware of an email [from Cllr Tolver] that has been sent to a journalist that says we spend about £50,000 per year to exist. What I would point out is that [you said the merger] would make a far more cost effective unit.

“I would ask if you stood for election with that in mind. ‘At long last’ was your comment.”

In response, Cllr Tolver said: “I did not stand for election with any of those thoughts in my mind. I believe it is up to the residents of Handforth to make this decision and not me or you.”

Cllr Cynthia Samson also spoke in favour: “I will be campaigning vigorously to stay independent. We are not the poor relations of Wilmslow.

“We have an excellent community. Somebody has just looked at a map and saw we are an independent parish council.”

As well as approving an official parish council opinion, members also authorised a £2,500 spend on a leaflet campaign on the issue.

“If residents want us to merge, that’s up to the residents. That is the whole point of consultation. We need to find out.”

Cllr Tolver raised concerns that taxpayers would be spending £2,500 on a leaflet ‘to be told how great we are’, to which Cllr Moore said would be ‘purely factual’.

Overall, the meeting was characterised by the deep divisions shown up by the viral clip between the members — rather than interruptions by members of the public seen last time out.

Despite disagreement over the merger, councillors did largely behave cordially on other issues, such as planning applications.

The next Handforth Parish Council meeting will be on 20th April.