Global celebration of Girlguiding in Tytherington 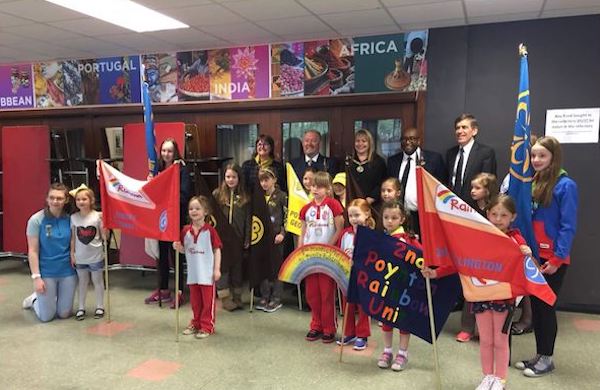 Girlguiding Middlewood Division was joined recently by Macclesfield MP David Rutley for its annual Thinking Day, an important day in the Girlguiding calendar when members across the world explore and celebrate their participation in the wider guiding movement.

Over two hundred of Middlewood Division’s members – from Rainbows through to Guides, and their leaders – took part in a fun afternoon of activities at Tytherington School.

There were five different zones running on rotation, each highlighting one of the World Association of Girl Guides and Girl Scouts’ world centres.

This year’s Thinking Day theme was ‘impact’, focussing on the positive ways in which guiding has changed the lives of the young people who take part, and their communities.

The day ended with a short presentation on what the girls had achieved throughout the past year, after which they renewed their guiding promises.

David was impressed to learn that there are over eight hundred and fifty Girlguiding members across Macclesfield, Poynton and Bollington.

Anyone interested in becoming a Girlguide, or volunteering with the organisation locally, can find out more at www.girlguidingcheshireborder.org.uk/middlewood

David said: “Girlguiding is an invaluable way for young women to gain important life skills and build their confidence.

“It was great to join Girlguiding Middlewood Division and its leaders on this special day, and to celebrate the positive impact of Girlguiding in and around our local communities.

“I hope yet more local young people, and new volunteers, will look at the benefits of taking part in Girlguiding.”