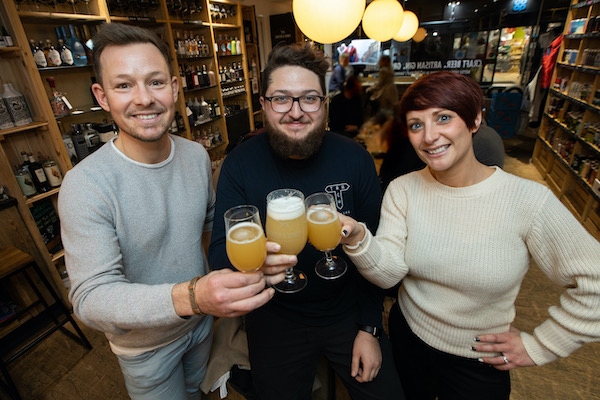 Husband and wife tv duo Adam and Katy Rickitt are the proud new owners of Dexter and Jones in Knutsford.

Hollyoaks star Adam and tv presenter Katy have been married for five years this Christmas, and were amongst the first customers to step through the doors of the Princess Street wine shop when it opened in 2016.

Dexter and Jones is a bottle shop and bar, specialising in artisan gin and craft beers that haven’t been discovered by the supermarkets or larger pub chains.

“From the moment we discovered the place we were hooked,” enthused Adam.

“Whether it was drinking in or finding a treasure to take home, it was just like a grown-up sweet shop!

“We said to the owners there and then that if they ever even thought about selling up they had to let us know first.”

Katy added: “In the summer, the day before we boarded the plane for our holiday, Karen – one of owners – rang to say they were putting the place on the market.

“We just looked at each other… and in unison said ‘yes’!”

But things haven’t been all plain sailing.

“We’ve had to pretty much beg, borrow, steal… and remortgage the house to make it happen!”

Katy explained: “The place has always meant so much to us we never really had a choice.

“The idea of it just disappearing or being turned into a chain was something we, and all the regulars, would have found heart-breaking.”

The couple have promised not to change anything about the venue, but they will be looking to enhance the wine and coffee offering – as well as putting on some food like tapas, as well as cakes and toasties.