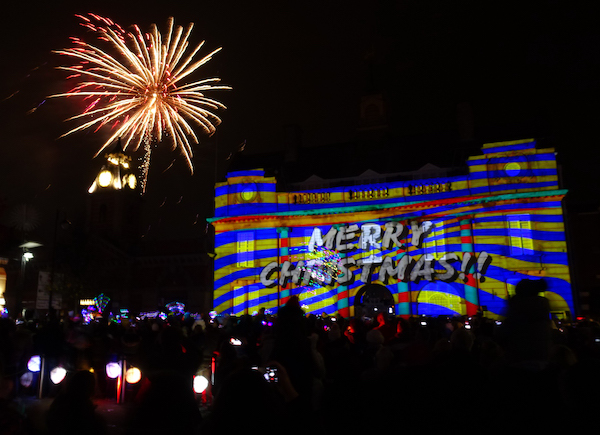 The festive season began in Crewe on Friday 23rd November 2018 with the town’s Christmas lights switch on and a winter fairytale projected onto the Municipal Building as part of a new month-long attraction.

The event featured a lantern parade led by Spark!, a street show with drumming and dancing to a kaleidoscopic lighting design, from Lyceum Square to Memorial Square.

On arrival at Memorial Square, mayor of Crewe Cllr Brian Roberts switched on the Christmas lights at 6.30pm.

The switch on was followed by the inaugural video mapping projection show ‘Lumen – Crewe’s Night of Lights’ on the facade of Municipal Buildings.

The stunning projection took viewers through a spectacular snowy, sooty, Victorian Crewe – telling the story of an unlikely pairing, a chance encounter and amorous pursuit.

The video projection will run every evening until 23rd December.

The projection show was followed by a spectacular fireworks display.

Crewe’s Memorial Square was lit by a magical glow of woodland creatures, giant flowers, luminous stars and ice drops and a ‘Fox Lady’ puppet who delighted children with walkabout performances around the town centre.

A winter market offered food and a wide range of festive gifts as well as a chance for children to meet Santa in his grotto.

‘Peal’, a laser-triggered emulation of a church bell tower blending state-of-the-art technology with 300 year-old ringing patterns, offered visitors a chance to ‘ring’ bells by cutting beams of light with their hands.

Channel 5 filmed the event for a forthcoming TV show (due to air on 21st December).

The event was organised by Crewe Town Council and supported by local business and partners.