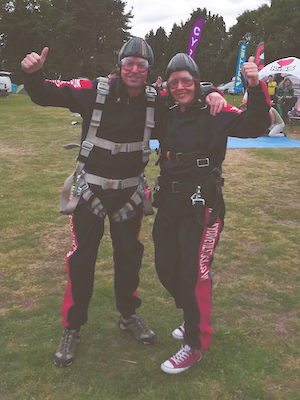 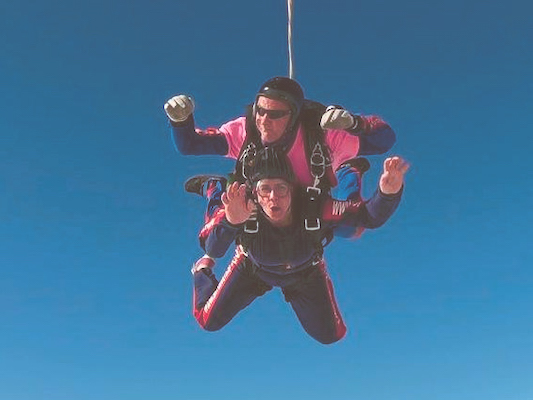 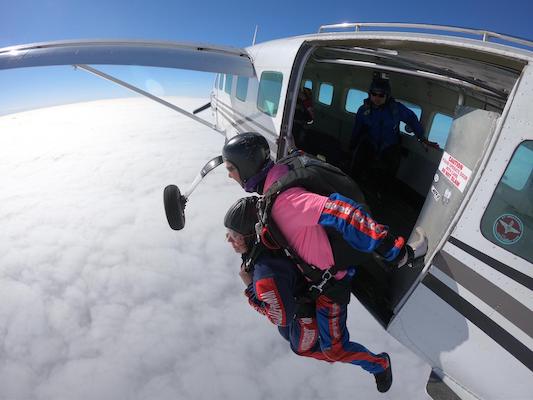 A Wistaston resident and her work colleague both completed their first-ever tandem skydives last month to raise money for St Luke’s Hospice.

Sarah Iggo, an inclusive learning advisor at Cheshire College – South & West and colleague Chris Baggs (director of learning and learner support) both took part in the charity skydive from Tilstock Airfield, near Whitchurch in Shropshire, on Friday 24th May 2019.

On the day of the skydive they received a safety briefing from their tandem instructors; put on a jump suit to go over their clothes, a pair of goggles, some headwear and a harness; then had a 20 minute flight to reach 10,000 feet where they were each then attached to a tandem instructor in a dual harness system.

On exiting the plane they experienced 5,000 feet of freefall at over 120mph before their parachutes were deployed for the final 5,000 feet.

Sarah and Chris made the jump in memory of their colleague Kevin Taylor who died from cancer at Christmas last year and their skydive has raised over £2,000.

Kevin, who lived in Nantwich and worked at the college as a funding and data facilitator, underwent a prolonged period of treatment including drug trials so that others may benefit in the future.

Kevin will be remembered for his sense of humour and flamboyant behaviour and for so often putting others before himself. He received care from, amongst others, St Luke’s Hospice.

St Luke’s is an integral part of the Cheshire community and since 1988 the charity has been providing local people with hospice care, offering them the support and help they need when their lives have been turned upside down.