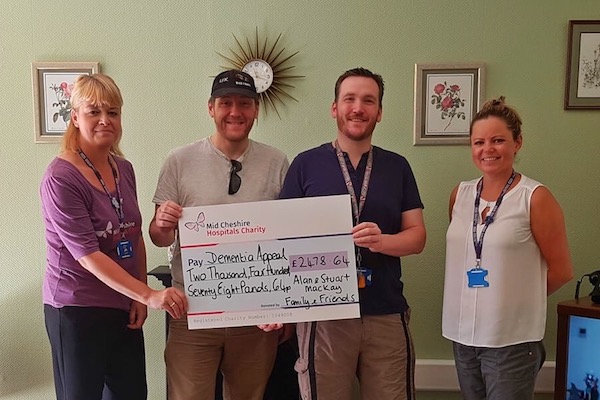 Back in April we told you about brothers Stuart and Alan Mackay from Crewe, who (at the time) were due to walk all the way from Edinburgh to Leighton Hospital to raise money for Mid Cheshire Hospital’s ‘Everybody Knows Somebody’ dementia appeal.

Well, they went and did it… and have since gone on to smash their original fundraising target too!

The pair are no strangers to long walks, having been long distance walking for four years.

Starting in 2014 with an idea to walk the West Highland Way, they have challenged themselves each year to continue to the very top of the country, before deciding to head back to the beginning and walk the other way.

Their ‘Walk N Boots’ challenge took place at the beginning of April over three weeks and covered over 400 miles.

Alan, who also works at Leighton Hospital said: “We would like to thank everyone who supported us with our grand adventure and we are delighted to exceed our target.”

“Their drive and enthusiasm for their fundraising has been inspirational.  The donated money will benefit our Dementia Appeal so big thanks to all involved.”

To find out more about Mid Cheshire Hospitals Charity dementia appeal and how you can be involved, contact Carole Salmon on 01270 273 248.

The trust is part of Central Cheshire Integrated Care Partnership (CCICP), a unique local health partnership that provides a range of community health services for people across South Cheshire and Vale Royal.

The charity works closely with the trust to make sure that all specialities are supported to spend every penny of the money raised on items that will directly improve patient care.

The charity’s current major appeal is called ‘Everybody Knows Somebody’ and aims to raise £1.5m to support a range of projects that will benefit people living with dementia and other cognitive problems.