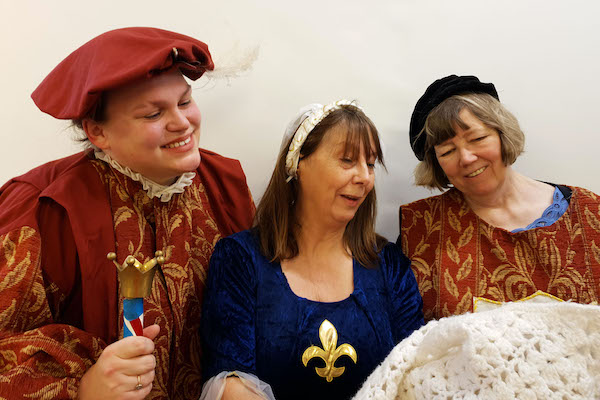 This year’s pantomime at Wilmslow Guild is Sleeping Beauty, the much-loved tale adapted for pantomime by Norman Robbins.

It runs from 11th to 14th December at Wilmslow Guild, the adult education centre on Bourne Street.

The panto is being directed by experienced pantomime director Grace Reed.

“It is always popular, but this version has the prince appearing in the first half instead of waiting until he wakes the princess with a kiss.

“All the old panto characters and jokes are there which makes ‘grown-ups’ feel nostalgia and children perhaps enjoying live theatre for the first time.”

Wilmslow Guild Theatre only holds 75, with the audience on three sides around the stage.

“It makes a wonderfully intimate show which really gets the kids involved in a way they just don’t get when watching TV or YouTube,” said ticket secretary Bill Beton.

“One year we had a little member of the audience run on stage and kick the baddie in the shins!

“While we hope that won’t happen again, it was hilarious at the time.”

Grace added: “It is always a pleasure to be involved with the panto as it gives a lot of our members time to enjoy the performance without too much stress.

“Come and enjoy the fun and don’t forget to cheer the ‘goodies’ and boo the ‘baddies’.

“It’s a great opportunity for everyone to enjoy the beginning of the festive season.”

The pantomime runs from 11th to 14th December at Wilmslow Guild, the adult education centre on Bourne Street.

Performances start at 7.15pm. Tickets cost £8 for adults and £5 for children (£6 and £4 on Wednesday) and can be booked online at www.wgp.org.uk (no booking fee) or by emailing tickets@wgp.org.uk.