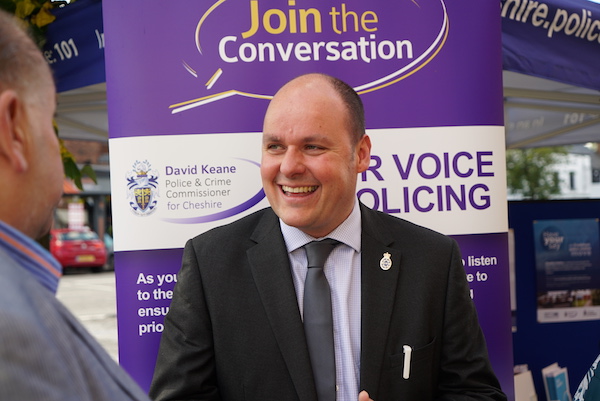 It follows an HM Inspectorate of Constabularies and Fire & Rescue Services (HMICFRS) report which said the police force had ‘substantially improved its crime recording accuracy’.

The inspection by HMICFRS in March 2017 raised a number of significant concerns around crime recording arrangements in Cheshire which led to the force being rated ‘inadequate’.

“To go from the lowest level of assessment to the highest level in just one year is testament to the hard work of officers and staff to ensure the appropriate processes are put in place so all crimes are recorded in the correct way.”

Mr Keane added: “Following the initial report, in my role as your elected police and crime commissioner, I held the then chief constable [Simon Byrne] to account, making sure the inspectorate’s recommendations were addressed.

“Since then I have continue to purse progress with the acting chief constable [Janette McCormick] to ensure urgent action was prioritised to make vast improvements to the way crime is recorded.

“I called an extraordinary scrutiny board meeting to get to the bottom of the issue, making it a standard agenda item at all scrutiny meetings since.

“This has enabled effective monitoring of performance measures related to crime recording at all meetings.”

HMICFRS inspectors found that Cheshire Constabulary is now recording 96.4 per cent of all crimes reported to it, 13 per cent more than the 83 per cent of crimes it was recording during its 2017 inspection.

They estimate that, in comparison with the findings from the 2017 inspection, this improved recording accuracy meant the constabulary recorded an additional 11,500 crimes for the year covered by the re-inspection period.

As a result, substantially more victims will have had their reported crimes recorded, meaning they can be offered support from Cheshire’s dedicated victims support service, Cheshire CARES.

It also means the constabulary has improved its understanding of demand and the extent to which crime is affecting its communities.

David added: “While these improved crime recording processes and changes to the culture of crime recording in the force have led to an increase in recorded crime across Cheshire, we can now be confident that crimes committed across the county are recorded in the right way, which can only provide more support for victims and give them a much greater chance of seeking justice.”

The inspection report can be found at: www.justiceinspectorates.gov.uk/hmicfrs/publications/cheshire-crime-data-integrity-re-inspection-2018/