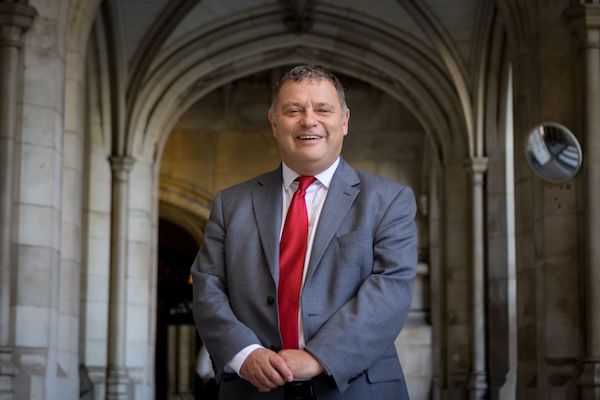 In this article, we speak to Mike Amesbury, standing for Labour in Weaver Vale.

I had the honour to be chosen to represent Weaver Vale in 2017.

I stood on a platform to put Weaver Vale first and throughout the last two and half years I have worked hard to do just that.

I have received thousands of emails and have taken up over 9,000 pieces of casework. I’m standing for re-election as I want to continue working hard for Weaver Vale.

Weaver Vale includes both wealthy areas and some of some of the most deprived in the country.

Since 2017 I have helped people with a whole range of issues, including housing, benefits, broadband, leasehold, public transport, planning and anti-social behaviour.

There is real concern here about fracking and the environment in general. I want an outright ban on fracking, not a pause, and I will continue to push for that.

I have campaigned for much needed investment in our public services, and I want to see revitalised, properly funded NHS services, including for Halton Hospital and Victoria Infirmary.

I’ll continue to fight against austerity and the devastating cuts that are bringing so much misery to some of the most vulnerable people in Weaver Vale.

It’s scandalous that foodbanks and child poverty are on the increase.

I don’t believe that things have to be this way and I will fight to bring love, compassion and humanity back into our welfare state.

Locally our economy provides a wide range of jobs and I want to see more opportunities for well-paid and skilled work in Weaver Vale, particularly for young people.

If re-elected, I’ll continue to be a strong Labour voice working hard for as MP for Weaver Vale.

I have worked hard to represent Weaver Vale since 2017 and I’ll continue to do this if re-elected.

Nationally, I will continue to campaign to undo the damage of austerity by pushing for investment, not cuts. £4.9M has been cut from school budgets in Weaver Vale.

In those same schools, 28% of children are living in poverty. This has to change.

I want to see a Labour government elected, so that we can get on with delivering the real change that is desperately needed, including properly funded schools and public services, scrapping Universal Credit, £10 an hour real living wage for over 16’s and free personal care for the over 65s living in England.

I want to see an end to the threat of fracking and urgent action taken to avert the climate crisis.

I’ve got to mention Brexit. I am in no doubt that Boris Johnson’s deal will make us a poorer nation, will tie us up in negotiations for many years to come and will see us destroy our relationships with our closest European neighbours.

It is shameful that Boris Johnson and his pals can change their minds on a whim, but the rest of us can’t be trusted to make an informed decision.

Only a Labour government will start proper, detailed negotiations with the EU and ensure a viable leave option is put to the people in a second referendum.

Beyond that, I want to see local devolution for Cheshire so that vital priorities and investment decisions can be set locally, rather than hundreds of miles away in Whitehall.

This election is vitally important and is an opportunity to vote for real change that works not just for a few, but for all of us.

I am proud that Labour’s manifesto is radical. There are so many people who have lost out in the last ten years and we need to give them hope for the future and the support they need to get there. No-one should feel left behind and the economy should work for all of us.

It is clear to me that austerity has failed us and we need a new plan. This manifesto is a chance to set Britain on a different, hopeful path. If you haven’t read it yet, have a look at www.labour.org/manifesto

I think the manifesto speaks for itself. I’d be delighted to see it being implemented by a Labour government on 13th December.

After more than nine years of this government’s failures, this is your chance to vote positively for real change.

I live in Frodsham with my family. My son attends a local school.

I am passionate about giving young people the opportunities they need to develop their skills and careers.

As a former Connexions manager and careers adviser I want to see more skilled apprenticeships and closer working between schools and local employers to the benefit of our local economy.

I’m proud to call Weaver Vale home, and I want to do so much more if I am re-elected as MP.