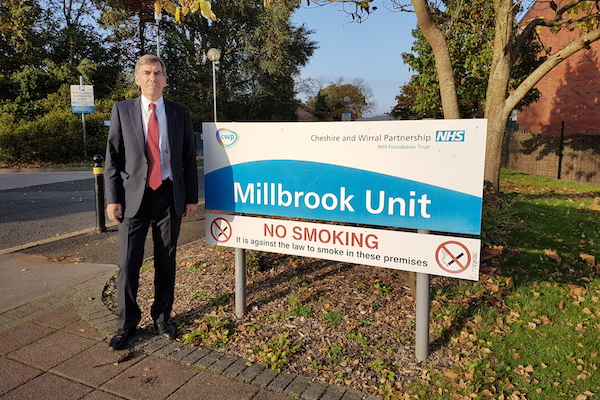 The NHS has approved plans to transform care for people in Cheshire East who experience severe mental ill health.

Against a backdrop of strong public opposition, healthcare bosses have altered an initial proposal which would’ve seen the removal of mental health beds from Macclesfield.

They say the decision will pave the way for greatly enhanced community services – including a dementia outreach service, 24/7 crisis service and crisis care beds.

David expressed concerns about the earlier plans to transfer the last remaining mental health beds in Macclesfield to Chester, and vigorously campaigned against this along with patients and local residents.

The inpatient beds currently situated within the Millbrook Unit on the Macclesfield Hospital site will be re-provided and replaced by 47 local beds designed to the latest modern standards, meeting privacy and dignity requirements set out by the Care Quality Commission.

The plans were included in a decision-making business case, which was published on 16th November, and approved on 22nd November.

Together with the enhanced local community support, a further seven beds for people with very complex needs – bringing the total re-provided beds to 54 – will be provided in Chester and Wirral.

The revised proposals, referred to by the NHS as ‘Option 2 Plus’ were approved at a joint meeting of the governing bodies of NHS Eastern Cheshire CCG, NHS South Cheshire CCG and NHS Vale Royal CCG.

The three CCGs are responsible for planning and buying most of the healthcare in the areas they serve.

Healthcare bosses said the option they’ve agreed answers many of the concerns raised during the consultation, by retaining the majority of inpatient beds in Cheshire East whilst still introducing all of the new community services.

They added that the new care model was supported by service users, carers and members of the public during the 12-week consultation which ran from March to May 2018.

Dr Bowen, who chaired the meeting, said afterwards: “The new care model will provide a much wider range of choice to meet people’s changing needs.

“It will offer better support in people’s homes and communities, recognising that 95 per cent of the 7,000 local people across Eastern Cheshire, South Cheshire and Vale Royal with severe mental health problems already access care in the community.”

Following a recommendation from the Cheshire East Council Health and Adult Social Care and Communities Overview and Scrutiny Committee, the consulting bodies have committed to:

Further detail on how to take part in the conversation during this additional period of consultation will be published on the NHS Eastern Cheshire CCG website at: www.easterncheshireccg.nhs.uk