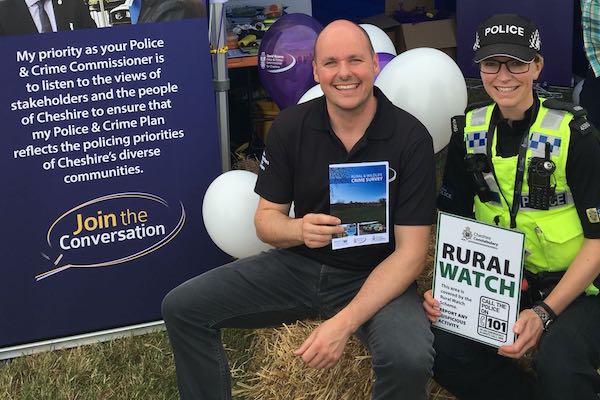 More than two thirds of residents who live in Cheshire’s rural areas think the police are doing a good job of keeping their communities safe, according to a recent survey.

Out of the 738 local residents who completed a rural crime survey run by Cheshire’s police and crime commissioner, 67 per cent said they were satisfied or very satisfied with police in their local area.

That’s in contrast to the national picture where just a third of residents (27 per cent) in England and Wales said they thought their local police force was doing a good job, when asked as part of the recent National Rural Crime Survey.

Mr Keane said: “Cheshire is an overwhelming rural county; 65 per cent of the county is classed as ‘rural’ so it’s incredibly important for police to have a good understanding of the issues which affect rural communities.”

However, the report also highlighted that although only 20 per cent of respondents said they had been a victim of rural or wildlife crime in the last three years, just 21 per cent of those had gone on to report it to the police.

“We need to do more to increase the public’s confidence of reporting crime to the police and raise awareness of initiatives being run by police to tackle crime in rural areas,” said Mr Keane.

He added: “Over the past few years police have put in place a number of schemes to specifically tackle rural issues including rural watch, horse watch and shield however, more than three quarters of respondents to the survey said they were not aware of these initiatives.”

Burglary, speeding and criminal damage dominated the list of concerns with these being the top three priority areas that residents completing the survey said police should focus on in the future.

The results of the survey will be used by the commissioner and the constabulary to develop a new rural crime policing plan for Cheshire which outlines the priorities for rural officers from now until 2021.